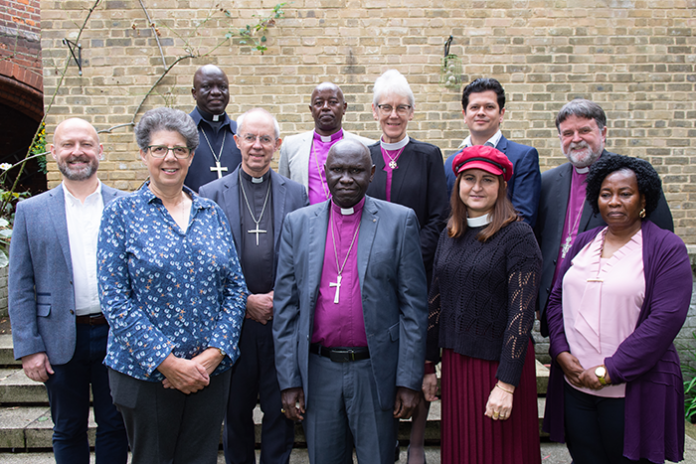 Members of the Anglican Communion’s Standing Committee have this week held their first in-person residential meeting since September 2019. Six archbishops, two bishops, a priest and five lay people, gathered for the annual meeting of the Standing Committee. Most were present in person at the Anglican Communion Office in Notting Hill, and at Lambeth Palace in London, with three members joining the meeting online.

The meeting began with the commissioning of the new Secretary General of the Anglican Communion, Bishop Anthony Poggo. It took place at a service of Holy Communion in the chapel of the Anglican Communion Office, Saint Andrew’s House in Notting Hill. The service was led by the Archbishop of Canterbury in the presence of Her Excellency Agnes Oswaha, the Ambassador of South Sudan to the United Kingdom.

During the meeting, Standing Committee members reflected on the hugely successful Lambeth Conference of Bishops, which took place in Canterbury, Kent, in July and August this year. They received and discussed reports and updates from different teams at the Anglican Communion Office – Anglican Consultative Council departments, the Anglican Alliance, and the Lambeth Conference company.

They also received reports from official Anglican Communion Commissions and Networks. These included a commitment from the new Anglican Communion Commission on Evangelism and Discipleship to “target one million new church plants in ten years” as they “continue to facilitate a movement of discipleship and disciple-making in all provinces, dioceses and parishes.” And also initial proposals for a new international Anglican Schools Network.

“This has been a very hopeful and uplifting meeting”, the Secretary General, the Right Revd Anthony Poggo said. “Standing Committee members arrived in London full of joy and very excited about the state of our Anglican Communion. I think that they – like most of us – are still buoyed up by the very successful Lambeth Conference which has had the effect of rejuvenating our Anglican Communion and strengthening the relationships on which the Communion is structured.

“Through the Lambeth Calls, the Lambeth Conference has given us plenty to think about – and we will do that as we consider how to bring these to the next plenary meeting of the Anglican Consultative Council, which will take place in Accra, Ghana, in February next year.”