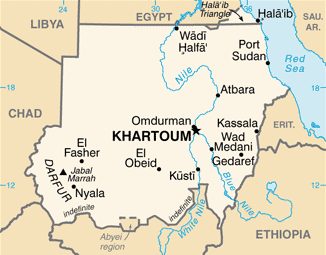 After a couple of years of encouraging moves towards freedom in Sudan, on Monday 25th October, General Abdel Fattah al-Burhan announced the dissolution of the transitional government and a return to military rule under a “state of emergency.”

Phone lines were cut. Sudan’s internet services were interfered with. There were widespread arrests. Protestors who came out onto the streets were dispersed with gun fire. The main roads and bridges into Khartoum were shut. Soldiers stormed the headquarters of Sudan’s state broadcaster in the capital’s’ twin city of Omdurman. Soldiers reportedly fired live rounds at protestors in the streets. The Transitional Sovereign Council and cabinet have been dissolved by General al-Burhan. Prime Minister Abdalla Hamdok was apparently detained on Sunday night and moved to an undisclosed location after refusing to issue a statement supporting al-Burhan’s “state of emergency.” Following international condemnation of the coup, the Prime Minister, Abdala Hamdok and his wife were, apparently, returned to their home where they reportedly remain under house arrest.

The background to these dramatic developments includes the successful secession of South Sudan from Sudan on 9 July 2011 and the overthrow of dictator Omar al-Bashir on 11 April 2019. Al-Bashir was placed on trial for corruption and genocide. A Transitional Military Council (TMC) was established. Massive protests resulted in a massacre on 3 June 2019 of around 100 people and a “march of the millions” on 30 June, which brought much of Khartoum to a standstill. Weeks of negotiations resulted in a power sharing agreement which sought to lead to eventual civilian rule. An 11-member Sovereign Council was established in which 5 civilian and 5 military members would work together with a civilian chairman elected by consensus and led by General Abdel Fattah al-Burhan. At least 246 people died in this Revolution in Khartoum.

Opponents to the transitional government blocked the Red Sea ports to bring about shortage of fuel, wheat and essential medicines, to sabotage the attempted move towards freedom of speech, freedom of movement, freedom of conscience and abolishing Shari’a law, flogging, amputations and executions for, amongst other things “Apostasy.” Speculation within Sudan is that the United Arab Emirates and Saudi Arabia have, with the Muslim Brotherhood, worked to undermine the transition to civilian rule in Sudan.

Friends in Sudan have requested urgent prayer as their country is on the brink of chaos and civil war. “Where there is no revelation, the people cast off restraint; but happy is he who keeps the Law.” Proverbs 29:18

By God’s grace, Frontline Fellowship used the window of opportunity provided by the ceasefire and unprecedented peace in Sudan to deliver and distribute hundreds of thousands of Bibles and New Testaments, along with tens of thousands of Christian school textbooks. This, along with leadership training programmes, laid solid foundations for the future.

Pray for the many Christians caught up in this unstable situation in Sudan; that they would be steadfast and courageous during this time of uncertainty. Pray that what man means for evil, God will use for good (Genesis 50:20). “And we know that all things work together for good to those who love God, to those who are the called according to His purpose.” Romans 8:28

Pray for the many Christians in the Nuba Mountains of Sudan who have enjoyed an unparalleled time of peace during which many schools have been built and churches rebuilt. Unless the Islamists and Jihadists are frustrated in their attempts to return Sudan to Shari’a law, the Nuba Mountains could well experience a resurgence of hostile attacks.