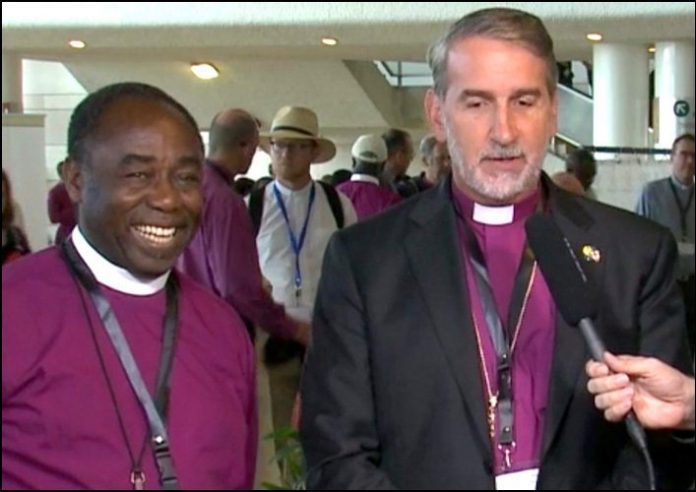 At an event hosted by GAFCON Australia today here in Sydney, Archbishop Foley Beach (Primate of the ACNA and now chair of the GAFCON Primates Council) reaffirmed that they will be turning down Archbishop of Canterbury’s invitation to attend the 2020 Lambeth Conference.

Beach answered a query I asked directly in the Q&A session of the meeting. You can see his full response below:

Beach observed that he received his letter of invitation from Welby on the same day that GAFCON were “insulted” in a press release that came from Welby’s office.

The GAFCON Primates consulted on the matter during their meeting this past week in Sydney and have written in response to Welby. While the contents of that letter have not been made public, I understand that they have made it very clear that the presence of those who participate in the consecration as bishops of actively partnered homosexuals, let alone the presence of those specific bishops, is in clear contravention of Resolution 1.10 Lambeth 98 and repeated calls for discipline from the Primates.

Beach also noted that Welby has sought to persuade conservatives to attend Lambeth by claiming that Resolution 1.10 will be reopened for debate and that if they do not attend, they may lose the vote. He went on to observe that continuous attendance at other meetings had simply failed to achieve anything and that “we’ve found that our voice is louder when we don’t attend certain events so we’re not manipulated from within them”.

Speaking to the matter a little later in the meeting, Archbishop Glenn Davies of Sydney pointed out that it was “incongruous” to not invite the spouses of those gay bishops when the bishops themselves were the issue. On the question of whether they would attend Lambeth he said “we’re going to remain firm”.

Archbishop Davies also told the meeting that the Primates had recognised an extra-Provincial diocese in New Zealand and their first bishop would be consecrated later this year, probably at an October event in Christchurch with Archbishops Davies & Beach and others in attendance.