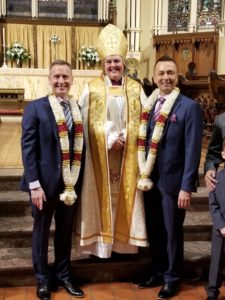 “Now then make confession to the LORD, the God of your fathers and do his will. Separate yourselves from the peoples of the land and from the foreign wives.” (Ezra 10:11)

So the same-sex spouses of Anglican bishops are not welcome to Lambeth 2020, according to an announcement by ACC General Secretary Josiah Idowu-Fearon on 15 February.

I need to clarify a misunderstanding that has arisen. Invitations have been sent to every active bishop. That is how it should be – we are recognising that all those consecrated into the office of bishop should be able to attend. But the invitation process has also needed to take account of the Anglican Communion’s position on marriage which is that it is the lifelong union of a man and a woman. That is the position as set out in Resolution I.10 of the 1998 Lambeth Conference. Given this, it would be inappropriate for same-sex spouses to be invited to the conference. The Archbishop of Canterbury has had a series of private conversations by phone or by exchanges of letter with the few individuals to whom this applies.

This is shameful even as it is shameless.

It’s shameful that the Archbishop of Canterbury was content to send Bishop Fearon as his surrogate to announce the bad news. Fearon himself never reveals who decided that it would be “inappropriate” to invite the spouses, but ultimately it is his boss who is responsible. The “misunderstanding that has arisen” derives not from Fearon but from Justin Welby himself, who extended the invitation to all active bishops and spouses (see the video that follows the announcement at 3:51).

What caused the hiccup between the making of the video and the issue of the press release? I think it had something to do with another news release and photo from Toronto about a wedding there. (above)

I am not the only person to notice this announcement. Archbishop Nicholas Okoh saw it and circulated it to the Gafcon bishops who are being wooed to come to Lambeth. I suppose the people at Lambeth Palace must have seen it too and decided that disinviting a few spouses was a lesser price to pay than alienating the bishops of the Global South.

A reasonable calculation, I suppose, but here is the problem: the Lambeth Establishment is all calculation and no spine. If, as some say, the Archbishop of Canterbury has the unique authority to invite or not invite to the Lambeth Conference, then he is the one who should announce his decision to the world. That’s the shameful partof this matter.

The shameless part is invoking Lambeth Resolution I.10 on Human Sexuality to justify the decision. To begin with, Communion officials almost never utter the words “Lambeth I.10”; and when they do, it is always a belittled and adulterated versionof the Resolution. In truth, it is a problem for them.

I was present at Lambeth 1998 and have explained it on more than one occasion. The Resolution is a clear statement of Christian moral doctrine. In brief it states:

What is fatally absent in Bishop Fearon’s recital of the Lambeth Resolution is #3. God not only ordains and blesses what is good, He declares what is sinful, which He calls immorality (porneia). Homosexual practice is by its very character sinful, as is heterosexual promiscuity and cohabitation.

So the problem is not just the scandal of the non-episcopal spouses but of the episcopal spouses themselves. Indeed, as bishops their sin is the greater (1 Timothy 3:1-2). The accountability goes even deeper. These bishops were nominated by canon, elected by their synods, and consecrated by their fellow bishops. Since judgment begins with the household of God (1 Peter 4:17), it is those churches and bishops who should be disinvited.

The shamelessness of invoking Lambeth I.10 is that they do not really believe it. They have already abandoned the prohibition on ordaining openly homosexual priests and bishops. They claim they are upholding the prohibition on same-sex marriage but only half-heartedly and until Lambeth 2020 is past. How likely is it that Justin Welby phoned the couples involved and explained: “I’m sorry, but you are in violation of Scripture and Resolution I.10, which as you know speaks of marriage as only between a man and a woman, and it will cause a scandal if you appear in Canterbury together”? And if he did say that privately, why will he not say it publicly?

It’s the same shameless pose which the Communion Establishment took toward the Episcopal Church in 2017: “Because of your violation of Communion norms, you may not attend Communion meetings for three years – until (surprise, surprise) 2020.” But what will have changed in 2020? Well, after 2020, it’s the norms.

Our Lord’s harshest condemnations were of hypocrisy: “Well did Isaiah prophesy of you hypocrites, as it is written, ‘This people honors me with their lips, but their heart is far from me; in vain do they worship me, teaching as doctrines the commandments of men’” (Mark 7:6-7). As I see it, this latest move is hypocrisy squared: shameful and shameless.