This is Part II of a series: Where Did Israel’s Temples Stand?

There are a good number of blog posts and articles on the Internet that deal with the relationship of Fortress Antonia to what is today called “Temple Mount” in Jerusalem. Most defend the current consensus among archaeologists that the two structures were adjacent, but that the Temple Mount area (some 35 acres) was vastly larger than the Roman fortress, which adjoined Temple Mount only at its extreme northwest corner. The scale model of first-century Jerusalem exhibited at the Israel Museum shows the consensus relationship:

The Fortress Antonia model consists of the four towers at the upper right-hand corner of the temple area. Here is a close-up of the model: 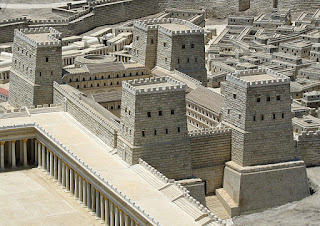 The problem is that there is precious little archaeological evidence to support this configuration of the Fortress, which renders it so small in proportion to the Temple area (about 1.5 acres compared to 35).

Fortunately, we have a good deal more eyewitness evidence than archaeological evidence. The first-century Jewish historian Josephus wrote about a number of features of the fortress. In particular, he states that it was situated on a rocky precipice that Herod had clad in smooth, polished stone to prevent any attempt at climbing it from outside, and that at its summit the fortress stood surrounded by a defensive wall that was three cubits (four and one-half feet) tall:

The fort of Antonia was situated at the angle formed by the western and northern colonnades of the outer temple  court, and was built upon a rock 75 feet high and precipitous on all sides. It was the work of King Herod, and a pre-eminent example of the breadth of vision which was inherent in his character. For a start, the rock was clad from the base up with polished stone slabs, both for ascetic purposes and to deny purchase to anyone attempting to climb up or down. Then in front of the fort building itself was a 4 1/2-foot wall, behind which the whole structure of Antonia rose to a height of 60 feet. . . .

One looks in vain for any such features depicted in the model at the Israel Museum. Indeed, by joining the front of the fortress directly to the northwestern corner of the temple colonnades, the Museum model makes it impossible for there to be any defensive wall 4 1/2 feet high, let alone such a wall perched on a rocky summit whose base was clad in smooth, polished stone slabs.

Regrettably, the same omissions are true of every other depiction of the fort I have viewed on sites that support the archaeological consensus, such as this one. But we are just getting started with the discrepancies between Josephus’ account of the fortress and the modern-day consensus.

Note that Herod would have had to construct the Fortress before he began renovating the Temple, a process which both Josephus and other sources indicate started around 20 B.C. The reason is that Herod named the fort for his old patron, Mark Antony, who died in 30 B.C. after losing to the forces of Octavian at the battle of Actium. Thereupon Herod submitted to Octavian, who became the emperor Augustus Caesar in 27 B.C. It would not have been politically astute for Herod to name the fort after Augustus’ former rival once Augustus became emperor — and Herod was nothing, if he was not politically astute when it came to appeasing his Roman overlords.

As a consequence of its construction at a different time, and as Josephus explains in another passage of his Jewish War (6:144), the fort was separated from the temple by the distance of a stade (600 feet), but connected to it by two parallel colonnades that afforded an easy access for troops passing between one and the other, and which was the scene of intense fighting back and forth as the Roman soldiers in 70 A.D. advanced from the fort to the temple. You will see nothing of such a separation, or of a double colonnade, in any discussion of the fort by current archaeologists.

Nor will you read in consensus accounts about the huge numbers of Roman troops who were stationed in Jerusalem from time to time while Josephus was writing. That is because the recent translators of Josephus, bowing to the consensus of the archaeologists, have gone out of their way to minimize, and hence mis-translate, what Josephus actually says on the point.

Look at the Israel Museum model of Fortress Antonia once again (above). How many Roman soldiers can you imagine squeezed into such a space? Even if one makes a generous assumption that there was a full 1.5 acres inside the model’s fort, that translates into just 65,000 square feet. Allowing just 65 square feet (13′ x 5′) for each soldier’s tent and personal space, that means a maximum of 1,000 soldiers could be squeezed into the fortress grounds, without allowing any space for avenues, markets, baths, temples, exercise grounds and other areas found in a typical Roman camp of the first century, such as this one: 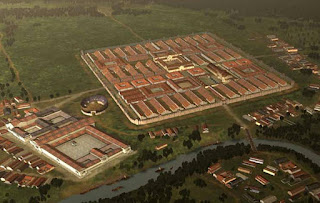 Josephus describes Fortress Antonia as capable of quartering an entire Roman legion, which typically consisted of ten “cohorts” of about 600 men each (Jewish War 5:244). To the 6,000 soldiers in any legion must also be attached those who made their livings by following and supplying army camps with everything from entertainment to food and drink — estimated at another 4,000 or so. As Josephus states, the Antonia Fortress had enough conveniences in it to be likened to a polis, or Greek city (Jewish War, 5:241). Such a level of services would be out of all proportion for a facility designed to quarter just a few hundred men. Take a look at this illustration of the space needed for a full Roman legion: 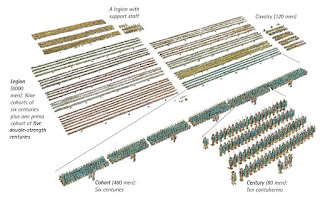 If the reader examines the modern translations of Josephus’ Jewish War, however, he or she will undoubtedly ask: where are the references to the Fortress containing a “legion” of soldiers? Both the most recent (2017) translation I quoted earlier, and the Loeb Classical Library edition of 1928 translated by H. St. James Thackeray, take the Greek word for “legion” which Josephus uses at 5:244, τάγμα (tagma), and translate it as “cohort”! In that way, they manage to shrink the Antonia garrison down to the size that will (still barely) fit into the modern consensus model of the fort.

Josephus, however, as an army commander himself and adviser to the Roman general Titus, knew perfectly well the difference between a legion (tagma) of 6,000 soldiers and a cohort of 600. When he wants to refer to the latter, he consistently uses the Greek word σπεῖρα (speîra — see, e.g., Jewish War 1:301, 323-24).

Or take another instance of willful mis-translation: the Greek word στᾰδιαῖος, or stadiaios, is an adjective meaning “one stade [~600 feet] long, deep or high”, or in other words, it describes the extent of the space that an object occupies. But the similar-looking word στᾰδαῖος, or stadaios, is an adjective meaning “standing erect or upright.” In his Jewish War 6:144 (a passage I referred to above), Josephus used the former word to describe the long, narrow space in which the rebel Jews fought the Romans along the tops of the double-colonnades running between the northwest corner of the temple and the gate of the fort — i.e., that space was one stade long, or just 600 feet.

Both modern translations, however, cannot square this description with the archaeological consensus model of a fort confined to a narrow area adjoining the temple’s northwest corner. So once again, archaeology is allowed to trump eyewitness testimony: the translators make the word stadaios instead of stadiaios, and claim that the Greek manuscript itself must be in error.

Other common-sense considerations come into play. Take a close look at the illustrations of the model fort above, and then consider the timeline. How would it make any sense for Herod to have built such a diminutive fort in about 33-35 B.C., only then to expand the temple platform northward in 20-15 B.C. so as to crowd in on the fort’s main entrance, and make it thereafter accessible only through the Temple itself? (Josephus says that there was a deep ditch on the fort’s northern side, making it unapproachable and hence easier to defend.)

The main function of the fort was to house soldiers who came with the Roman prefect from Caesarea to Jerusalem to occupy it during the times of the Jewish holy festivals, when there might be over a hundred thousand pilgrims crowding into Jerusalem. Six hundred soldiers would be wholly inadequate to maintain control over such a crowd; 6,000 soldiers would be far more able to do so.

But the fort was an alien space to Jews like Josephus. They would have kept out of it, for fear of becoming unclean. (Recently, some ritual baths (mikva’ot) were uncovered at the foot of the southern steps leading up to the al-Aqsa mosque. Archaeologists pounced on their discovery as evidence of the existence of the Temple on the platform to which the steps led, but their presence is just as consistent with there having been a Roman fort on the platform, so that Jews who had to go to the fort could cleanse themselves immediately upon exiting it.) For this reason, no doubt, Josephus keeps his descriptions of it entirely to what could be observed of its exterior.

It is, then, only by selectively interpreting (and mistranslating) Josephus’ eyewitness accounts that modern archaeology can form a consensus around the notion that Fortress Antonia was just a pimple on the northwest corner of a huge Herodian Temple Mount. When one reads the full account in his Jewish War, and the corresponding passages in his Jewish Antiquities, there is no basis whatsoever to try to confine the area of the fortress to such a ridiculously small size for its admitted purpose. (Indeed, typical Roman camps of the time were between 30-33 acres in size, so the platform which Herod constructed on the craggy summit overlooking the City of David was perfectly capable of being adapted to the needs of the Roman troops that had to come there.)

Nor does any other comparably sized site exist in the area of greater Jerusalem at which both a full Roman legion could be quartered, and still manage to fit Josephus’ description of its site, as follows:

For if the temple lay as a fortress over the [lower] city, Antonia dominated the temple, and the occupants of that fort were the guards of all three, for the upper city had a fortress also, at Herod’s palace. [Jewish War 5:245-46; my translation and emphasis.]

This is just a smattering of the eyewitness evidence showing that in the first century, the Roman troops were quartered from time to time in Fortress Antonia, which had to occupy most of the 35 acres of the present Haram esh-Sharif platform on which the Dome of the rock and the al-Aqsa mosque currently sit, and which modern archaeologists and today’s religious Jews insist was once Temple Mount. There is much more laid out in Ernest Martin’s (now out-of-print) book, The Temples That Jerusalem Forgot. Unfortunately, that book is a tedious read, because Dr. Martin repeats himself endlessly, and a good deal of patience is needed to sort out the main points of his argument.

In the next installment in this series, I will go into the history of what became of Fortress Antonia after 70 A.D., when the Romans razed Herod’s temple to the ground, and left not even one foundation stone standing — while the same obviously is not true, as may still be seen today, of the foundation of the Roman fortress itself.